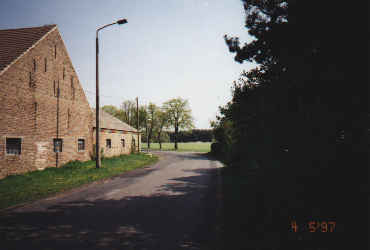 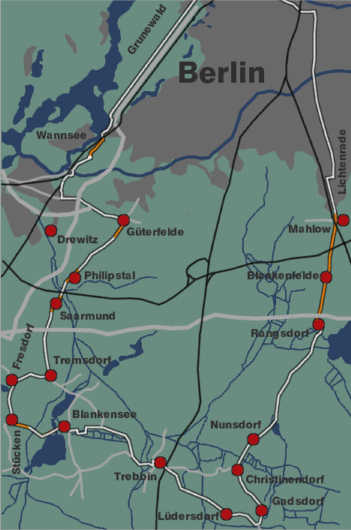 Distance: 120 km (including the section in Berlin)

Berlin is an island in Brandenburg, one of the sixteen Länder that make up Germany. Brandenburg is part of former East Germany, while two thirds of Berlin were part of West Germany. Both were separated by the Berlin Wall, which ensured that urban development was limited. Today the wall is gone, and Berlin enjoys an almost complete absence of urban sprawl. Although the first part of this tour skirts the Berlin/Potsdam area, which is more heavily built up than most of the rest of the Berlin border, the change from city environment to countryside seems almost abrupt.

The pictures in this page all look similar - tree-lined narrow roads going through open fields and forest. Brandenburg is a patchwork of small fields and forests, with many small lakes and rivers. The pictures have been picked rather at random; they are not highlights but typical views on the ride. All pictures were taken in early spring, when the trees began turning green. Enjoy! 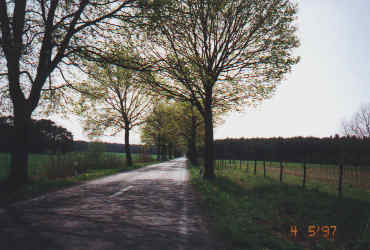 The tour begins at the S-Bahn (light rail) station Grunewald and follows Königsweg/Kronprinzessinnenweg between the AVUS freeway and Grunewald forest. This road is closed to motor traffic and extremely popular with cyclists. After reaching the Wannsee S-Bahn station, turn left underneath the bridge and right, following the railway for a short time, and then follow the left turn into the forest. Turn right into the second path, at the forest map. This is a dirt path but ridable with road bikes, and avoids the congested road to Potsdam.

The path ends at a circular paved square (how's that for an oxymoron). Turn left and cross the bridge. After the bridge, make a right-angle right turn into Königsweg and follow it through the village until it changes its name to Bernhard-Beyer-Straße. When it ends, make a left turn followed by a 90-degree (not sharp) right turn. You can avoid the cobblestones there by leaving Bernhard-Beyer-Straße shortly before it ends and following the paved footpath to the right.

The road will run through a residential area for a short time and end at a stop light. Turn left into Großbeerenstraße. This is the turn north of Drewitz in the map. If you miss it, you can go through Drewitz and joining the route near Saarmund, but you'll have a lot more traffic and less scenery. 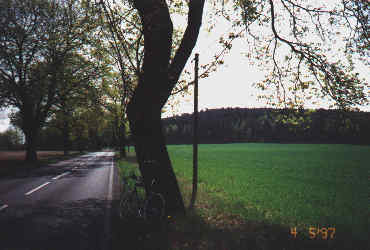 When reaching Güterfelde, make a right turn and follow the road, which will lead you in a 180-degree loop around a small field. You can shortcut it if you don't mind cobblestones by riding along the row of house at your right. You won't escape cobblestones in Güterfelde anyway. This tour avoids poor road surfaces if possible, but no tour in Brandenburg will be cobblestone-free, especially in small villages. The roads that connect them are generally in excellent condition.

Stay on this road through Philipstal, Saarmund, and Tremsdorf. Tremsdorf is a small village. After entering it, ride through for a few hundred meters, then turn right on their only intersection. I always look for the telephone switch box at the right. Be careful not to miss this turn; it makes the tour longer but avoids much rough cobblestone road and is very scenic. This area is one of my favorites in Brandenburg.

After a few kilometers following the winding narrow road, you'll reach Fresdorf at a T intersection. You can turn right here until you reach Michendorf and then following the B2 road if you want to abort, but despite B2's good bike path this is not a pleasant ride because of the traffic. Instead, turn left until you reach Stücken. Follow the sign to Blankenburg left. The road is wide but not very inviting - it's cobblestones, but is paved after a kilometer or so. Follow it to and through Blankensee. 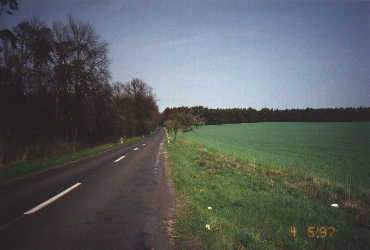 The road ends at a T intersection after leaving Blankensee. Turn right, following the sign to Schöhagen, and left again after a few hundred meters, following the sign to Glau. This is one of the few roads that is not lined by trees, but it has little traffic and a good bike path for most of the way. You will ride past a large walled-in area called Friedensdorf (peace village) that looks like an abandoned rotting military installation, with crumbling buildings and a strong gate.

After Glau, there is a short stretch paved with large square stones with deep gaps; avoid that part. The road merges with the 246 road in Löwendorf, follow it to the left into Trebbin. The road ends at a T intersection in Trebbin. Turn left into 101 towards Ludwigsfelde, and turn right after a few hundred meters, at a stoplight, towards Christinendorf. You'll avoid the 8% incline warning sign, but the terrain gets mildly hilly from here all the way to Christinendorf.

After crossing the railway tracks, turn right towards Sperenberg and follow the signs towards Lüdersdorf. This road is longer than the direct one to Christinendorf, but a lot more scenic, and has less traffic. Ignore all signs towards Sperenberg after the initial one, ride through Lüdersdorf and turn left towards Nunsdorf. You'll ride through Gadsdorf, Christinendorf, Nunsdorf, and Rangsdorf. After Rangsdorf, follow the signs to Mahlow and Berlin, and don't be too discouraged because of the long distance - it's the distance to the city center, not the border.

In Mahlow, turn right when the road touches the railway tracks, cross the tracks, and take the second road left, which has a sign pointing to Berlin. Unfortunately much of this road is paved with cobblestones - mild ones but not very comfortable. (Cobblestones in Brandeburg range from smooth, flat ones to bone-shattering boulder dumps with deep sand on both sides). Most roads in this area are either very busy with motor traffic or poorly paved, and there aren't very many to begin with. If you decide to extend the tour to the East, beyond Königs-Wusterhausen, you'll find better roads but many of the railway and river bridges are closed, and you'll find that your ride gets much longer than anticipated.

There is a huge flea market just outside Berlin-Lichtenrade on weekends, with enormously long stop-and-go traffic. It's unavoidable. Once in Berlin, there are bike paths that lead all the way to Tempelhof airport. The figure of 120 km for the ride includes returning to the starting point in Grunewald.