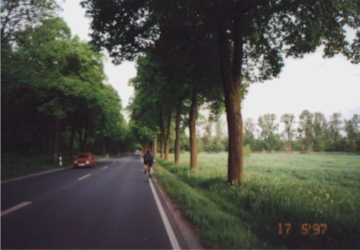 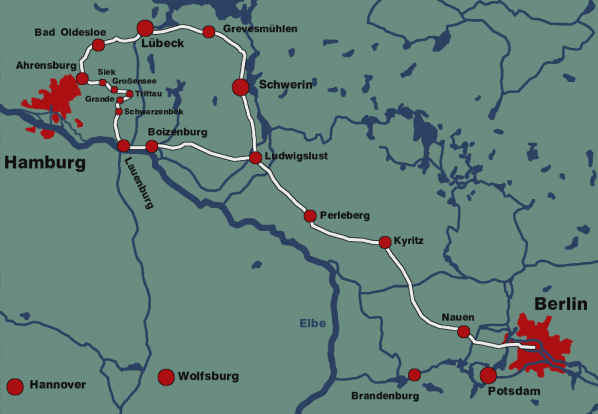 With 300 km, this is an exceptionally long day tour. I try to do this once a year, if the conditions are right: it must be sunny, there must be no headwind, and it must be mid-summer with fifteen hours of daylight. Pure riding time is 11 or 12 hours (at an average speed of 26 or 27 km/h), but with rest stops and lunch it takes more like 14 hours. This means leaving early, before six o'clock in the morning. 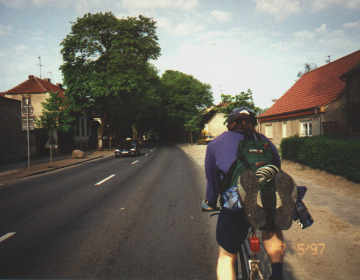 Riding very long distances requires special preparation (I wrote about this in another page). You need a healthy breakfast, take lots of water and food, and ride below your normal speed. I use a Polar heart rate monitor, and for the first half of the ride I succeeded in keeping my heart rate below 130 beats per minute (which my friend no doubt found rather slow). Later I was forced to increase the limit to 150 and near the end I was over 170, but this helped to avoid falling into my usual routine of riding at around 160. The trouble with riding too fast is that you'll have no trouble for the first half of the ride but unless you do this sort of thing all the time you'll be unable to complete the ride.

Pack all the water you can carry, at least two liters. Especially on holidays you may be unable to find open shops and restaurants in small villages to fill your bottles, and there aren't many larger ones. Also bring bananas, sandwiches, Power bars or other energy food, and some chocolate bars if all else fails (not a good idea in general but it saved us twice already near the end). Plus tools for fixing flats and other problems. Don't forget maps. The best ones are blue ADFC maps, 1:150,000, number 8, 2, and 3.

For most of the time we use Bundesstraße 5, which was the one of the three old ``transit highways'' that permitted access to West Berlin from West Germany, back before reunification. It is very well paved, like most rural roads in Germany, but a few of the villages you'll pass through still have cobblestones. This is not a major problem on this ride, and gets better all the time as villages resurface their streets. I use racing bicycles with a rack installed for the occasion, with 20-22 mm high-pressure tires.

On the entire trip regional railway stations are never very far. Service on these railway lines is slow on weekends, you may have to wait up to two hours and you may have to switch trains, but this allows you to bail out if the ride turns out to be too long after all. We took the IC train back to Berlin; it has bicycle compartments. Bicycle tickets are cheap; reservations are recommended but I have never seen them even half-full.

We leave Berlin on Heerstraße, which begins at Theodor-Heuss-Platz and runs through Spandau all the way to the city limit, where it turns into Bundesstraße 5 at the former GDR border checkpoint. There is little chance for getting lost until Nauen, the next town on Bundesstraße 5. For part of this distance, there are bicycle lanes, but the surface isn't as good as the road. The road is normally very busy, but since you'll be starting very early you'll have almost no traffic. Once I started at ten o'clock and had to deal with heavy traffic all the time. 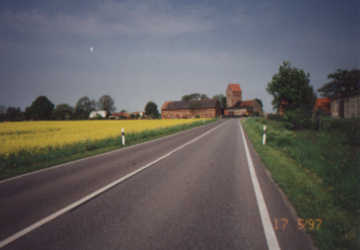 After Nauen, traffic is no longer a problem because Nauen is the last big town after Berlin, and people who drive longer distances use the freeway which runs parallel to Bundesstraße 5. The next town, Friesack, is easy to miss because Bundesstraße 5 routes traffic around it. We saw no reason to stop this early into the ride. The same thing happens in Kyritz. You will have to ride through Perleberg, where traffic increases until Ludwigslust.

Around this time it's time for lunch. You'll have to pick the restaurant carefully. Some restaurants in former East Germany still haven't picked up normal Western standards and serve gut-wrenching pickled salads and meat and soggy potatoes soaked in gravy. On the other hand, on one of this tours I have eaten the best ham and fresh asparagus (near Kyritz) I ever had. It's hard to give rules to apply - if you want good home cooking look out for buildings that look like homes, and avoid restaurants whose furniture still sports East German fake wood and menus printed on fading paper. Avoid dishes like pasta or Chinese - you can be certain that the cook in one of these forgotten villages is neither Italian nor Chinese. Avoid fatty dishes such as fried potatoes, they are going to be more fatty than a similar dish in Berlin or Hamburg would be, and you still have a long way to go and can't spend time digesting.

All pictures on this page were taken between Berlin and Perleberg. They all look similar - a narrow two-lane road (Bundesstraße 5), usually lined with a row of trees on either side, that runs between forests and open fields. This is typical for Brandenburg and Mecklenburg-Vorpommern, the two of six Länder that used to be part of East Germany. These pictures are not highlights; the road looks like that all the way.

The standard route continues to follow Bundesstraße 5 to Boizenburg, the last town in Mecklenburg-Vorpommern. After crossing the old East/West border, of which no trace remains, the road becomes very busy, and one crosses through unpleasant industrial sections of Lauenburg for a few kilometers. If you want to ride on to Hamburg, stay on Bundesstraße 5, but our destination was Ahrensburg, a town northeast of Hamburg. This rest of this description goes on to Ahrensburg. 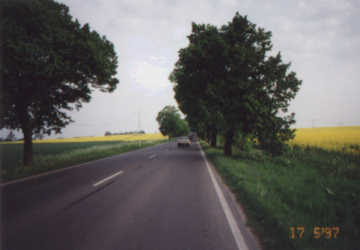 In the center of Lauenburg, follow signs to B209 to Schwarzenbek to the right, at a large intersection. Do not continue straight on Bundesstraße 5 to Geesthacht. Shortly after making the turn into B209, B209 branches. Take the left branch through Gülzow and Kollow. (If you miss this branch, B209 will also reach Schwarzenbek, but it has more traffic.) For the rest of the tour you need good maps. A compass is also useful.

In Schwarzenbek, cross B207/209 and the railway line, and follow B404 north. This is confusing because B207 to the west is also called B404, but that way you won't cross the railway tracks. The next stop is Grande, after passing through Kuddewörde. Although you stay on B404, turn right in the center of Grande and left again shortly after leaving Grande. This leads you north, skirting the west edge of Trittau. B404 is a divided highway that is not legal for bicycles, but it has a bike lane on the left side. It is difficult to find, watch out for a blue bicycle sign on the left near the no-bicycle sign on the right, where the fence begins. The bike lane disappears at the second bridge; turn left towards Großensee.

Alternatively, if you miss B404 after Grande, you can ride into the center of Trittau and turn left, and left again after leaving Trittau, also towards Großensee. In Großensee, follow the main road to Siek. When entering Siek, turn right and follow the road through the center of Siek, turn left towards the A1 freeway, cross over the bridge over the freeway, and ride through Großhansdorf into Ahrensburg.

LUDWIGSLUST TO SCHWERIN AND LÜBECK

Last year I didn't leave Berlin until after 10 o'clock, which is too late to ride three hundred kilometers and still arrive before sundown. So I turned right in Ludwigslust towards Schwerin. The road there is not very exciting; it runs through a former military area with little to look at except warning signs every few hundred meters. 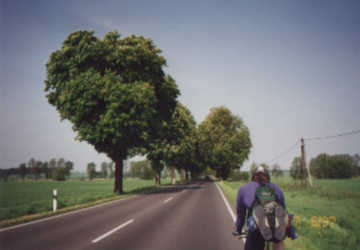 Schwerin has a dilapidated youth hostel that mainly caters to schoolchildren, but it's scenically located at one of the many lakes there. The distance from Berlin to Schwerin is only 210 km. The next morning, I toured Schwerin, and left Schwerin to the north, and turned left into on B104 (E65), which leads to Grevesmühlen. Lübeck is hard to miss from here; either follow B105 through Dassow and Selmsdorf, or follow the railway tracks through Börzow, Schönberg, and Lüdersdorf to avoid the traffic on B105.

Lübeck is not a large city, but it takes some time to cross the suburbs and reach the center. Much of downtown is a pedestrian zone surrounded by heavy traffic. Leave it on B75 to the southwest; the traffic on B75 is bearable because the A1 freeway runs in parallel. B75, like most roads in Schleswig-Holstein, is utterly boring; unlike roads in Brandenburg and Mecklenburg-Vorpommern they are not lined with trees, there are few forests and the fields are flat and have little to look at. Follow B75 through the sleepy town of Bad Oldesloe into Ahrensburg. If you want to proceed to Hamburg, you can follow B75 all the way into the center of Hamburg, but it is narrow and there is a lot of traffic after Ahrensburg.