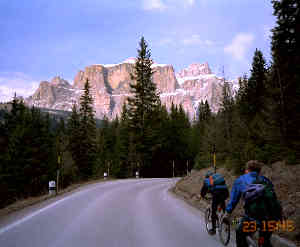 
Our Italy tour this year (April 1995) visited two places, the Dolomites and Garda Lake not far to the southwest. Our Garda Lake excursions are described on a separate page.
The map on the left is a detail of the Italy map on the right, of the yellow rectangle south of Bolzano and east of Trento.

Mt. Marmolada is a mountain in the Dolomites in Italian Alps. We stayed in a hotel and Arraba, a small village to the north of Mt. Marmolada. We used Arraba as a base for various day tours. This report describes the longest and most interesting one. The length was only about 130 km (could be wrong - someone told me it's only 65 km), with two passes at 2056 and 2239 meters, respectively. The map above shows the roads we took; we rode the loop clockwise. We used Mountainbikes, but the same tour can easily be ridden with road bikes. Many interesting others in the same area require mountainbikes, though.

Mt. Marmolada is in the central Alps. Before I first went there I had this mental image of snow-capped peaks and vertical cliffs that could not possibly allow any reasonable bicycle riding. I found this is wrong, it's in fact fairly easy - if exhausting - to ride in the Alps because all the roads and trails avoid the really steep mountains and remain in the valleys and lower and less steep mountains. Riding in the Alps means rarely riding on either level or really steep roads, 4 or 5% is typical but it can reach 10% or more in places. Roads usually wind their way up or down in serpentines. I live in Berlin, which has only very minor hills, and I am a poor climber, but I found that I can manage a pass or two a day in the Alps without too many problems. The reward of the trouble is awesome scenery. 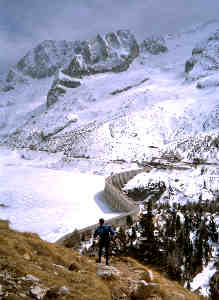 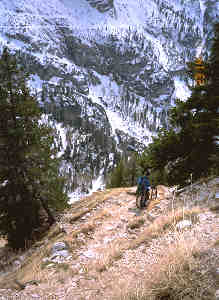 The left picture shows the dam that closes off Lago di Fedaia at its western end. There is a two-lane road on top, the tiny dots in the picture are cars. We crossed the dam attempting to find a trail to cross over the mountains towards Passo Pordoi, to avoid having to ride on roads. The trail was very steep and rocky, and forced us to carry the bicycles most of the time. After reaching the top of the first hill, the going got worse and the trail nearly disappered.

The left picture shows the situation shortly after we decided to give up and return to the road. It cannot relate the steep slope at the right and the immensity of the panorama. You'll also have to assume an expression of apprehension on my friend's face, looking down the rocky steps that led back down to the road...

The right (second) picture was also taken on the trail and gives an idea of the dire consequences of slipping. My friend can be seen a little to the left of the center. The Alps are not inherently dangerous, but when the map says hiking trail they really mean it - expect a path that is so rough that it can barely be seen at times. Bicycling shoes with cleats for the clipless pedals are definitely not the right approach to a trail like this. It is easy to slip if the rubber happens to be worn down and you are walking on the bare metal.

Not that the scenery suffered because we returned to the roads. The picture at the top of this page was taken about 45 minutes later. Gorgeous vistas opened to the left and right, and here ahead, all the time. 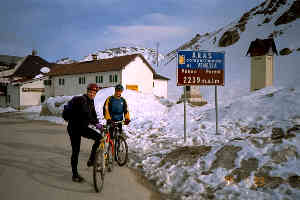 This picture shows the station at the top of the Passo Pordoi , at 2239 meters. I found the ascent fairly tough after all we had done that day, there is a sequence of steep turns that wouldn't end even when the station was in sight. Another bend and another and another... But I made it and gobbled down whatever carbohydrates the slightly dilapidated restaurant could provide. I don't remember what I got but it helped. My friend who took the picture immediately got restless instead and began exploring side roads to some sort of monument. Oh well...

The rest of the trip was downhill, mostly. Traffic was light, but there were frequent turns and we couldn't just let go and blast down most of the time. Still, this was fun. Although there was a lot of snow near the top of the hill and all the way to Arraba, the road was spotless and perfectly dry. Also, it was astonishingly warm, even in April and despite all the snow.