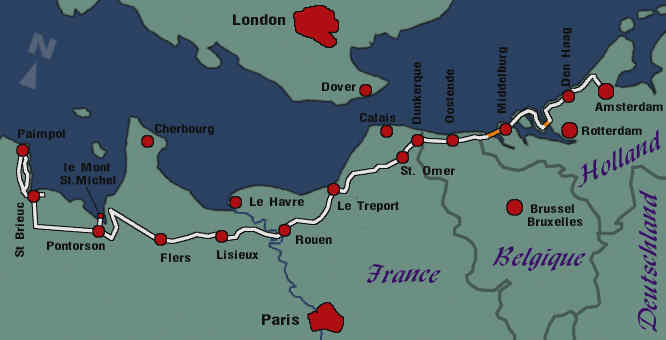 The tour began in Holland. We took the train to the Amsterdam Central train station, right in the center of Amsterdam. We had a reservation at the International Budget Youth Hostel, Leidsegracht 76 (020-6242784). I picked it from the hostels advertising on the Internet, and it turned out to be an excellent choice. Small but central, in an area less crowded with tourists but plenty of restaurants and shops.

We spent two days in Amsterdam, mostly walking around town. Amsterdam downtown consists of canals (grachten) forming concentric half-rings with the train station at their focal point, with numerous radial canals and bridges. The whole downtown manages to be uniformly charming with its narrow, paved streets and narrow old houses. Nearly everybody rides incredibly decrepit bicycles (to prevent theft) with massive locks. We left our bicycles locked in the hostel.

This path ran all along the coast. We followed it to Hoek van Holland. The next two pictures show a stretch of bike path in the dunes at the channel coast and a view of the channel beach:

There was a rather abrupt change after entering Belgium; the cyclist's heaven ends just after Sluis. We decided again to bypass cities like Brugge or Brussels, and followed the coast. Only there were no bike paths; all we could do was using less busy side roads from Blankenberge, De Haan to Oostende, then on the N318 to Middelkerke, Nieuwpoort (a problem because we had to detour around the harbor), then on N396 past Veurne and De Panne into France.

After leaving Holland we didn't really find a good reason to stop anywhere in Belgium - it was all asphalt and concrete and car traffic, and ugly and boring towns. I am sure that there are beautiful places in the Belgian countryside, but I can only warn people to stay away from the coast. We rode all the way from Middelburg to Dunkerque in France in a single 175-km day.

(29 May 2002) I received recommendations to ride in the Flanders region of Belgium, which is supposed to be beautiful and quite unlike the nasty coastal route. In particular, we should have followed signs Noodzee cycle route and Noordzee fietsroute from Sluis to Boulogne. I'll check it out next time.

Until now we had a nice tailwind and sunny weather, but in the Normandie the weather turned against us, with a strong headwind and lots of rain. The weather in Europe is always unpredictable but now it got uniformly unpleasant, and stayed that way until the end of the trip. Perhaps this makes my memory of the Normandy more gray than it would have been otherwise, but it seemed rather uninteresting - I can have a prettier countryside with more vegetation here in Brandenburg any day. 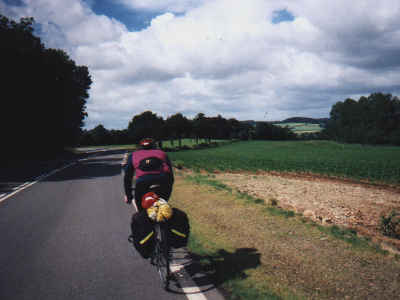 This is one last picture of riding in the Normandie, one of the nicer ones that actually shows some blue patches in the sky. (Note that my friend isn't color-blind, but the wet weather required more layers of clothing than we had planned for :-)

Pontorson is close to the Bretagne (Brittany) border. Our next destination was St. Brieuc in the Bretagne, another trip we shortened by train after getting rained on in le Mont St. Michel. We stayed at my aunt in Yffiniac near St. Brieuc and cured our developing colds, except for a small day trip to Paimpol to the north of St. Brieuc. This tour demonstrated once again that St. Brieuc is virtually unnavigable without a good compass, and I think I would still be lost there without my GPS receiver, one of its few applications on this trip.

All in all, while I recommend all my bicycle tours in these pages, I'd give the Normandy and the Belgian coast low marks in comparison to the rest. Spend more time in Holland instead, or in the Loire area of France. There is much more to see there.